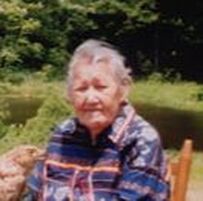 Edna "Grandma" Gordon, was an Elder of the Hawk (Henhawk) Clan of the Seneca Nation, which is one of the six nations of the Iroquois Confederacy. She lived on the Cattaraugus Territory, just south of Buffalo, NY. Edna was a strong woman, and loved to write stories, poetry, and share her messages with the world. I can personally vouch for her infectious energy, when after settling in from a long 8 hour drive, she kept me up doing interviews from 4pm until 4am! The 19 cups of chewy coffee she delightfully served me might have helped me stay awake, when I was trying to keep up with her! That was when I was in my twenties and she was in her eighties! She was just as spirited, up until her December evening, when she passed at the age of 93. We will be continuing to share her words and messages, and the wonderful videos from interviews and gatherings she hosted. ​~GBB

Our beloved Wisdomkeeper, Seneca Hawk Elder Edna Gordon, 93, has walked the Strawberry Path and on Friday December 6th was lovingly planted by her People in her Beloved Mother Earth. Her Spirit will never die. Weep and smile with me as she joins hands with her loving husband Hannibal, both young again, romping playfully among the Stars as she once did along the banks of the O-hee-oh.*  ~Harvey Arden
This video is a compilation that our good friend Perry Finkelstein, filmed and edited. Please watch and share with your friends!
Youtube: Waska111
Edna Gordon produced dozens of booklets that she printed herself. She one day approached Harvey Arden to ask that he help publish proper book. He found dozens of ways to say no, but she was not discouraged and told him that he would. Eventually, Harvey caved and told me we had a new project to work on - a book called "Voice of the Hawk Elder" which would be a collection of her stories messages and a sampling of her poetry. Harvey sent me the text and Edna sent me a bunch of drawings that her grandchildren drew to go along with her writing. I had the honor of designing the book and publishing it through HYT Publishing, that Harvey and I started in 2004. Below is the cover. Click on the book to read a sample of her writing.

Voice of the Hawk Elder 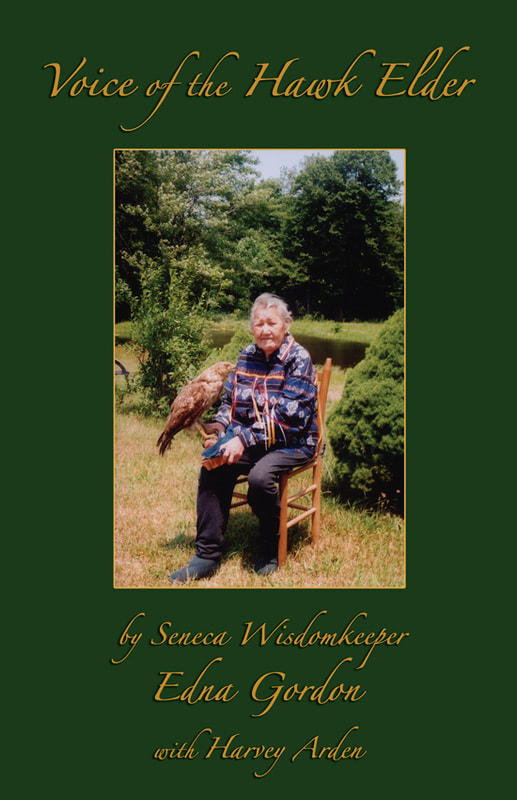 Voice of the Hawk Elder, by Edna Gordon (with Harvey Arden)
Edna and Harvey teamed up for her second book, A Broomstick Revolution, in which she encourages all of us to sweep out injustice and violence and join a peaceful revolution of Change! The title poem is below... 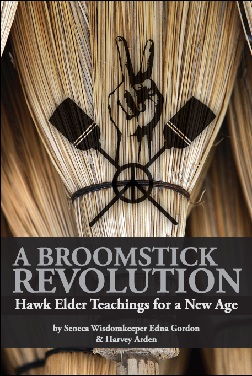 WE NEED CHANGES in this world, really big big changes.
I'm prayin' they'll be peaceable changes, not violent and bloody ones.
I'd like to see a peaceable revolution,
a revolution of broomsticks instead of guns.
Call it a Broomstick Revolution.
That's right. We the People pick up our broomsticks
and march together and Sweep Injustice Out!
Make a clean sweep, a big cleanin' like's never been seen before.
Broomsticks against Injustice. Now that'll be the day!
Yep—a Broomstick Revolution! That's what we need!

Become the Leader you are!  Inspire others to their own responsibility of Leadership.
​Each of us is responsible for sweeping out injustice and violence from our world–and from our own hearts.
Look around you, right where you are now–that’s where you begin.
Heed the Instructions that arise within you.

Only PEACE will be effective.
Love all people, even–especially–your perceived ‘enemies’. We want to save the world, not destroy it.
My love and encouragement to each of you.
Some advice: Stay out of big mobs. Work alone or in small groups, groups of Leaders.
Let your actions be peaceful and non-destructive.
Blessings,
​~Grandma Edna