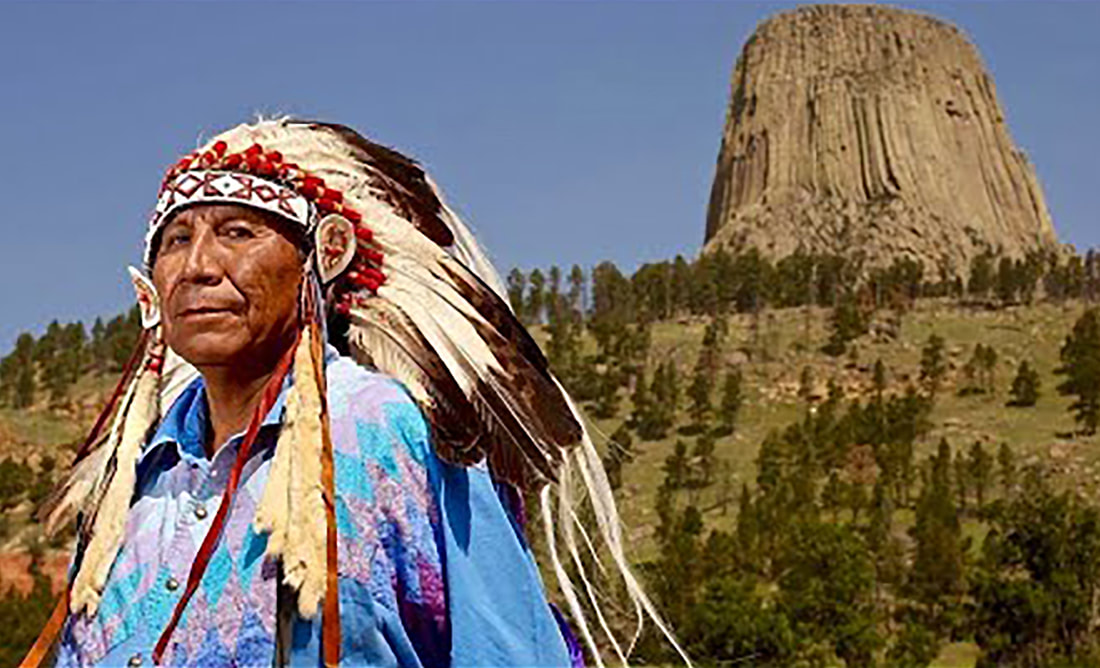 Chief Arvol Looking Horse was born on the Cheyenne River Reservation in South Dakota. At the age of 12, he was chosen to be the 19th Generation Keeper of the Sacred White Buffalo Calf Pipe.  He is widely recognized as a chief and the spiritual leader of all three branches of the Sioux tribe. He is the author of White Buffalo Teachings and has been a guest columnist for Indian Country Today. A tireless advocate of maintaining traditional spiritual practices, Chief Looking Horse is the founder of Big Foot Riders which memorializes the massacre of Big Foot's band at Wounded Knee.

Following the birth of a White Buffalo Calf in 1994, Arvol felt called to honor it with a ceremony on June 21st. According to the Lakota, the birth of "Miracle", the female white buffalo calf, signaled a time of earth changes and the coming of the mending of the Hoop of All Nations. The Summer Solstice is said to be a powerful time to pray for peace and harmony among all Living Beings. Arvol organized gatherings around Sacred Sites to collectively pray for the healing of Mother Earth and All of Us. That ceremony marked the beginning of an annual tradition, one that Arvol hosted: World Peace and Prayer Day!

All Nations recognize Sacred Sites as Places to gather or perform ceremonies. For countless generations, these Sacred Sites were honored, cherished and strengthened through ceremony and Our Mother remained healthy. To ensure the lives of future generations for all our relations, we must begin again to honor, cherish and renew Our Mother. We must all join in a unifying Prayer and ACTION, to bring forth World Peace and Harmony.

A few videos Arvol has been featured in...

All Nations, All Faiths, One Prayer.

World Peace and Prayer Day was founded in 1996 in the Black Hills of South Dakota by Chief Arvol Looking Horse, 19th generation keeper of the sacred White Buffalo Calf Pipe of the Sioux Nation. Arvol Looking Horse was led by a vision to honor sacred sites and to invite all nations and all faiths to do the same, to heal our relationship with our mother, the Earth. World Peace and Prayer Day is held annually on the summer solstice, June 21st, a powerful day to pray for peace among all living beings.
​
The first ceremony (1996) took place in the West at Gray Horn Butte in Wyoming following a horseback ride from the Wahpeton Dakota reservation in Saskatchewan. Tradition holds that it was near this site that White Buffalo Calf Woman first appeared. For this ceremony, over 2,000 people joined together mostly drawn by word-of-mouth. In 1997 Chief Sundown of the Joseph Bighead Reserve in Canada hosted the ceremonies for the North. In 1998 the gathering moved east to another traditional sacred site, Pipestone, Minnesota.
​
Chief Looking Horse chose Costa Rica as the site for the 1999 ceremonies. Costa Rica is the home of the University for Peace established by the United Nations. Thus World Peace and Prayer Day first gained international recognition by bringing together native people of North and South America. It is believed that this event fulfilled prophesies concerning the uniting of the eagle and the condor. At the completion of the first cycle (Black Hills, SD 2000), Chief Looking Horse asked the Global Community to continue the ceremony at their sacred sites at a place of worship or at a geographical site that their Nation identifies as significant. In handing back the responsibility of continuing the prayers and activities to the local people in each community and country they are empowered.

After the 2000 ceremony two English representatives approached Chief Looking Horse with a request to conduct a similar series of ceremonies to further strengthen the message of Peace on a global level. This journey would be around the world to the remaining four continents with a Thank You Ceremony back at Turtle Island (Americas) in five years. This global journey commenced in Ireland in 2001, lending support to a country seeking resolution of their difficulties. This country has a long tradition of Summer Solstice celebrations which honor the Earth.

In 2002 WPPD traveled to Durban, South Africa working with the coordinating assistance of Ella Gandhi, granddaughter of Mahatma Gandhi. Over five thousand people participated in this event in a show of peaceful solidarity, celebrating their cultural and ethnic diversity.

In 2003 WPPD joined the Aboriginal tribes of Australia, honoring their most sacred site of Barumbuk, while bringing attention to the need for healing of their “lost generation”.

In 2004 WPPD joined Japan honoring their most sacred site Mount Fuji. Mt. Fuji, located at the center of mainland Japan, has been regarded as Japan’s most sacred site. It is known throughout the world as the symbol of Japan. WPPD world delegates were also invited to participate in traditional ceremony at the Peace Memorial in Hiroshima.

In 2005 WPPD returned to its origin in the Black Hills at Piedmont, South Dakota for the Wopila (Thank You). Through World Peace and Prayer Day’s 10-year endeavor, we established a global community in recognition of June 21st as “Honoring Sacred Sites Day”. Over 1000 participants interacted in the exchange of ideas in sustainable living alternatives through indigenous knowledge, the importance that we protect sacred sites throughout the world and the power of prayer and ceremony.

The ongoing events of WPPD continued to support the endeavors of the Wolakota Youth Council’s Youth Run, as well as promote the event worldwide with Religious Organization participation in their Mosques, Temples, Churches, Synagogues and Indigenous Spiritual endeavors at Sacred Sites. In 2006 Chief Looking Horse attended the Eklutna (Alaska) WPPD and in 2007 there was a ceremony and a Sacred Youth Run to the Teotihuacán Aztec Temple in Mexico hosted by the Keeper of the Temple Pedro Diaz. For 7 years we had the Youth Runners assisting in running with their prayers for a better future and a healing of Grandmother Earth from the present conditions that are impending on their survival.

From 2006 on events were held simultaneously around the world. Each year brought in new participation. In 2008 New Zealand’s Maori Nation sponsored an event inviting Chief Looking Horse, other Native American delegates and Indigenous Representation from other Countries.

In 2009 (Oakland, CA) and 2010 the effort continued to promote activation of more Sacred Sites and bringing attention to issues at hand in North America. An example is the sponsored event at a Horse Sanctuary in Massachusetts (2010) which brought attention to stopping the slaughtering of horses.

2011 was in Minneapolis, Minnesota and was accompanied by a horse ride from the border of South Dakota to bring attention to the water.

2012 was in Brazil at the World Earth Summit, in which hundreds of Amazonian Tribes participated in the gathering, praying for the Rain Forest. They had walked hundreds of miles to the UN Summit asking why no one was helping their plight.
In 2013 gathering occurred in Santa Ynez, California. Many Californians are worried about fracking and statewide drought. This event brought attention to the visible changes happening to this state.

2015 we worked with the Native Tribes in the area of Rogue Valley Oregon in Ashland, Oregon. Grandma Agnes Baker Pilgrim from the 13 Grandmothers assisted in hosting us along with a local community group. We had a Run, walk and horse ride.

2016 & 2017, a deep connection was established between Chief Looking Horse and cultural practitioners from HawaiʻI, when all were in New York City (2016) for the arrival of the voyaging canoe Hōkūleʻa. Water keepers from around the world brought vials of water to offer to the Hōkūleʻavoyagers and shared stories from their homelands of water contamination and protection. At this point, the commitment to also host WPPD on HawaiʻI Island in June 2017 with concurrent celebrations on Oʻahu during the canoeʻs homecoming along with bringing attention to the telescope on their Sacred Site Mauna Kea.

The 2018 event was hosted by The Sycuan Band of the Kumeyaay Tribe (San Diego, CA) hosted us all in a grand style of hospitality. The tribe also assisted us with our yearly Sacred Run from the Pacific ocean, in which we flew in Runners from Minneapolis and South Dakota, from ages 16-52 and also 2 elders of 76 and 83. The Sycuan Tribal Chairman and the Bird Dancers came to greet us and local Kumeyaay members provided the manning of the sacred fire and cooked the daily feasts.
In 2019 we honored the deep roots of Fort Ancient in Lebanon Ohio, not far from Serpent Mound. The mound culture shows the antiquity of Native Americans on Turtle Island.

The positive impact of World Peace and Prayer Day events has given participants a foundation of knowledge to take back to their own communities and work for solutions. We accomplished a global community empowered by unity and determination to set a standard in alternative living practices and use environmentally safe products. They also gained an understanding in the importance of protecting Grandmother Earth’s most sacred sites through preserving the sites natural resources.

“Each of us is put here in this time and this place to personally decide the future of humankind. Did you think the Creator would create unnecessary people in a time of such terrible danger? Know that you yourself are essential to this world. Understand both the blessing and the burden of that. You yourself are desperately needed to save the soul of this world. Did you think you were put here for something less? In a Sacred Hoop of Life, there is no beginning and no ending.”   - Chief Arvol Looking Horse 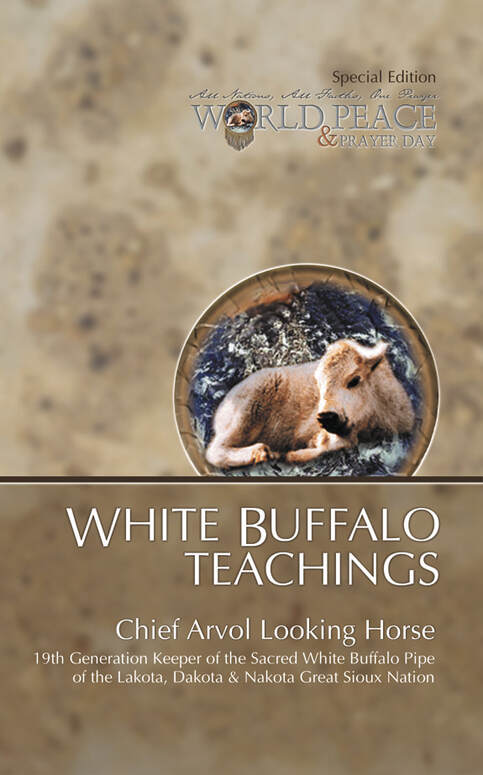 ​The book, White Buffalo Teachings, was first published by Arvol Looking Horse in 2001.  It is an in-depth look into the Lakota story of the White Buffalo Woman and the knowledge she gave to the Lakota people. It also is an in-depth look into the life, thoughts, and deeply moving words of Arvol Looking Horse. It is a powerful message and the poetic invitations for us to come together in this important time to make a difference are echoed with hope throughout the book.
"We need a great healing, and we need a Great Forgiving. But healing can't begin without forgiveness. We must Forgive each other, Forgive our loved ones, Forgive our friends, Forgive our enemies, Forgive ourselves. We need to pray for a person who had done us wrong! Forgiveness itself is a powerful medicine. We need forgiveness to create Peace!" - Chief Arvol Looking Horse
To learn more about The BridgeKeepers Project, email us at: info@thebridgekeepers.com