I was born in Brooklyn, New York and moved to Philadelphia when I was four years old. I was not consulted in the matter. I knew from childhood that I wanted to be a writer. I love playing with words, coming up with new combinations and puzzles.
​
My first job was as a news reporter at a rock and roll radio station. I then learned television production and expanded into films. For 45 years I was a scriptwriter and sometimes producer. I specialized in documentary, environmental and non-profit programming, and my work appeared on PBS, Discovery, History, CNBC, European and Asian TV. I also co-wrote two produced feature films and four short films.

​It was the winter of 2000 and I was flat broke, a not unusual state of affairs for a freelance writer. To while away a dreary afternoon I wandered into a bookstore and was rummaging through a discount pile when one volume caught my eye. It was entitled Travels in a Stone Canoe, and was written by Steve Wall and Harvey Arden. I bought it and promptly forgot about it for a few months. It must have called to me in my sleep, though, because one morning I was suddenly consumed by the desire to go along with these travels. When, after a single sitting, I closed the last page it was with the clear understanding that te world I lived in when I started the book was not the one I inhabited now.

Travels in a Stone Canoe is a behind-the-scenes account of the writing of Arden’s and Wall’s best-selling Wisdomkeepers: Meetings with Native American Spiritual Elders. It opened doors to me I didn’t even suspect existed and taught me the powerful lesson that it is never too late to reinvent oneself. I didn’t rest until I tracked down Harvey and wrote to him about the indigenous worldview that demolished so many stereotypes and misconceptions I’d held. This led to a lively correspondence and, eventually, a fast friendship.

The master had many lessons in store for his new apprentice. I expanded my knowledge of native folkways, met some exceptional people and got to use my talents as a writer and filmmaker in an effort to promote the preservation of native cultures. I am convinced that the  wisdom of native spiritual elders is essential for the survival of the species, and that the industrialized world must be prepared to give as eagerly as it receives.

At 72, I am still an avid student. I learn from artists, the animal world and the greatest teacher of all, Nature. I know in my heart that we are all interdependent and that once we fully accept that concept, harming another being would become unthinkable.

I think back to that winter day in Tampa some 20 years ago. At the time all I thought I was doing was picking up a book. What I couldn’t have guessed was that I was lighting a flame in my heart that has led me ever since.

In 2014, I suddenly got the urge to write children’s books. I had composed quite a few for my son when he was small, and he delighted in them. My first published book was
To learn more about the books and how to order them, please visit the My Books page. Or read and listen to my interviews to discover more about me and my books. You can also contact me directly if you have further questions.

Why did I start writing children’s books?

It was because I wasn’t seeing the books I had wanted to read as a kid.

In my books, you won’t be a bit surprised to see an elephant bounce off a trampoline or a sleepy blue whale nearly be the cause of war. That’s just the way things are in a Mild Wild Media book. 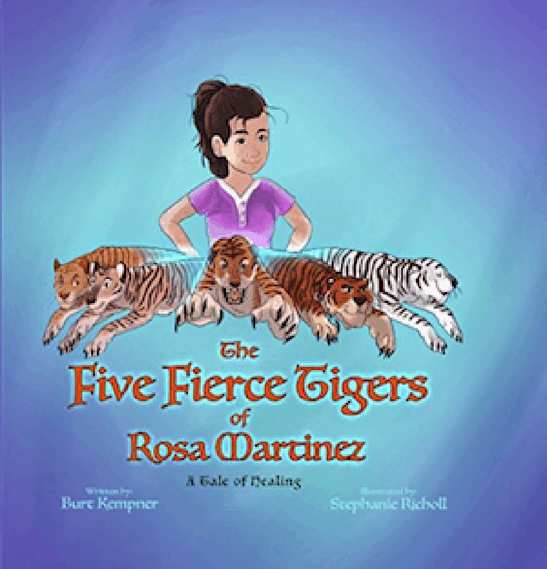 Rosa Martinez is seriously ill. She has the loving support of her mother and grandfather and a doctor who takes good care of her. But she also has a secret weapon. Rosa can summon five tigers to come to her aid when she’s ailing or in big trouble. Her disease may think it has the upper hand for now, but wait until it encounters Gautama, Arik, Vashti, Selena and Quan–the five fierce tigers of Rosa Martinez. Young readers will delight in their daring adventures and who knows: they may even be able to call forth guardian animals of their own when they need them.
Learn More About Rosa's Powers...
MAISHA THE EDUCATED ELEPHANT   -  A School of Animal Magic Adventure – Book 1 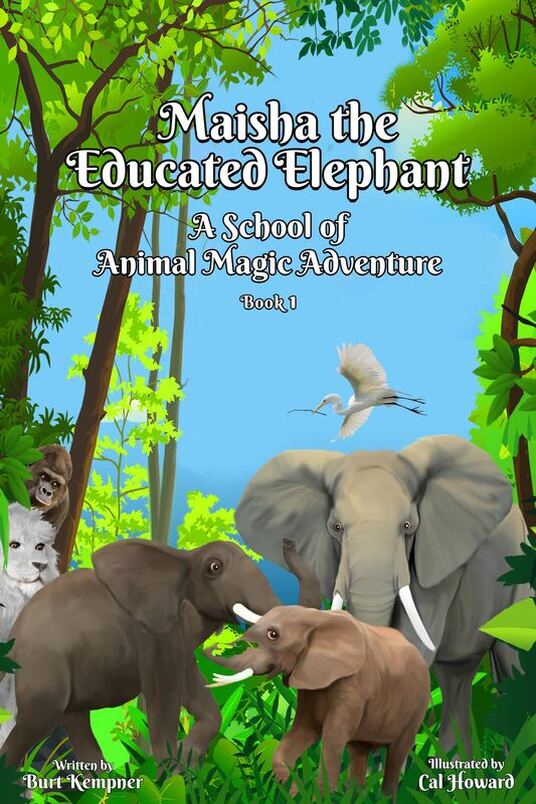 Young Maisha is the pride of her elephant herd. They sent her off to study about the outside world at the prestigious School of Animal Magic. She returns bearing an urgent warning. If only she can remember what it is! As she struggles to recall what she learned time may be running out for the herd — and all elephants. Maisha the Educated Elephant combines a charming story with a compelling message about animal survival.
Get To Know Maisha...
DOLPHINS IN DISTRESS  -  A School of Animal Magic Adventure – Book 2 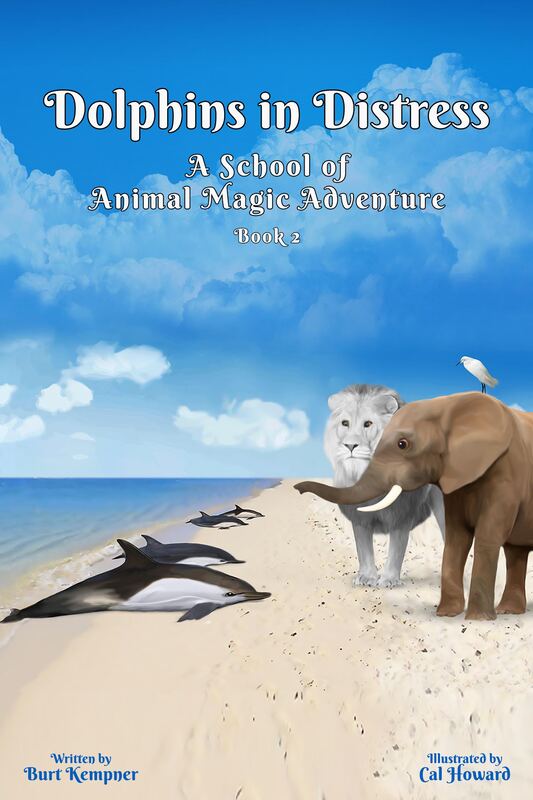 Why are dolphins and whales beaching themselves around the world? The School of Animal Magic action team — Maisha the elephant, Jonas the cattle egret and Maliki, a white lion from the stars — is sent out to find answers and nothing, not even a sea monster or the man with the world’s largest ears, will get in their way. A rollicking adventure that also addresses a little-known danger to marine mammals.
Help Them Find The Answer...
THE SALMON WHO WANTED TO RUN   -   A School of Animal Magic Adventure – Book 3

It’s one of Nature’s most inspiring sights: Each year thousands and thousands of salmon make an incredible journey from the ocean to the rivers where they were born to spawn. It’s called a run, but why are so many of the fish dropping out of the race? What’s holding them back? The School of Animal Magic action team – Maisha the elephant, Jonas the cattle egret and Maliki, a white lion from the stars – is sent out to investigate. Will they arrive on time to save the salmon?
Go On An Adventurous Run...
THE PURPLE WAVE  -  A School of Animal Magic Adventure – Book 4 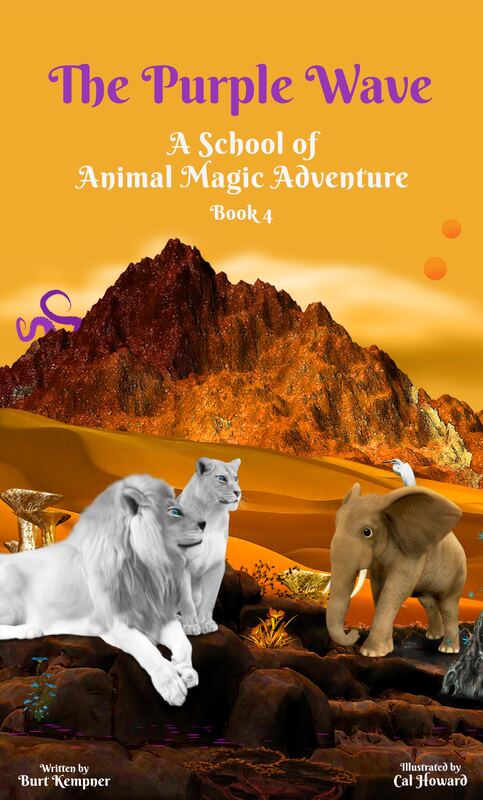 With his mysterious ability to work magic on Earth, Maliki the star-born white lion, is an invaluable member of the School of Animal Magic action team. When he learns that his home planet is in great peril, he secretly teleports his fellow team members – Maisha the elephant and Jonas the cattle egret – there and tells them about a fearsome Purple Wave that could destroy his world’s civilization. The problem is that Maliki possesses no magical powers on his own planet – but Maisha and Jonas do! Will they master their new skills in time to defeat the Purple Wave and spare the planet’s inhabitants from total disaster? This is the wildest mission the School of Animal Magic team has ever undertaken.
Can They Stop The Purple Wave?